I love baking, especially this time of year,  but I do tend to be a little cautious when it comes to trying new recipes and techniques. However, every once and awhile I will have the urge to try something new, and this time it is pumpkins.

I have to start off by saying this, I had no idea what I was getting myself into, I didn’t have a recipe or tutorial to follow, I just know I wanted little fondant pumpkins. Looking back these were very easy to make, but I won’t lie and say they were not time-consuming, in fact, it took me about five hours start to finish. This may have been because I didn’t really know what I was doing, or maybe they just take ages, either way, I didn’t feel like I wasted my time at all, in fact, I felt extremely proud of myself. 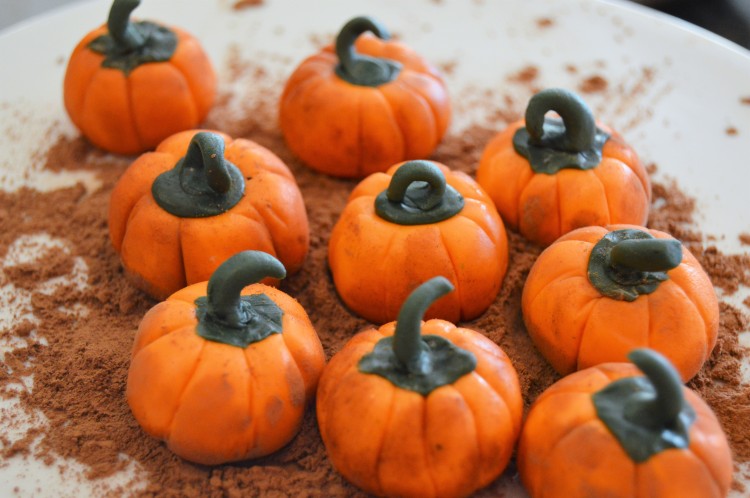 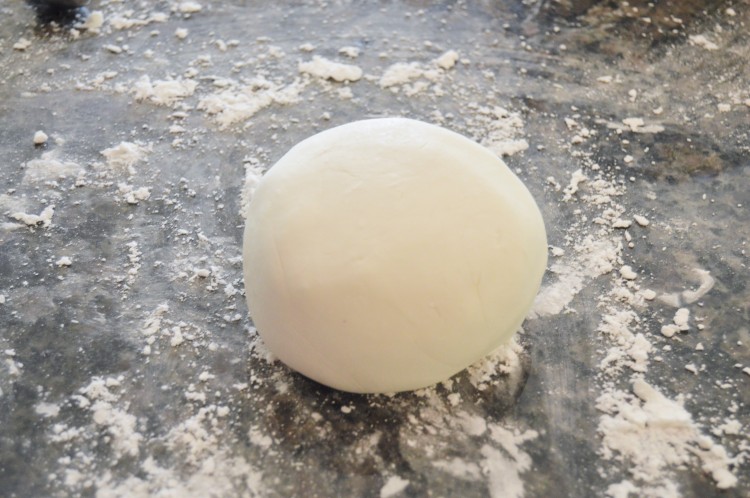 To Start off, I use (this recipe) for my fondant, it’s super easy to make marshmallow fondant the hardest part is getting the food coloring evenly throughout the fondant so it doesn’t look streaky.

Once I made my fondant, I divided it into to two, one part is about a quarter the size of the other, that will be colored dark green for the pumpkin stem, and the other a bright orange for the pumpkins themselves.

To color the orange fondant I used orange gel food color from Wilton, and for the green used green gel and got the fondant to a bright green, and then used a little black to give it that deep earthy green.

Once I had gotten my fondant colored, I rolled the orange into a rope that was about an inch around. Then I cut the rope into sections that were about one inch long.

Next, I rolled those sections into balls, I wasn’t worried about making them look perfect because pumpkins aren’t perfect. Then I placed them into the refrigerator to chill.

I then rolled sections of my green fondant into thin ropes, I’m not sure what to liken the size to, but you want them to be a fitting size to be the stems for your soon to be pumpkins. I then placed the green fondant sections onto the wax paper and put them in the fridge to chill. 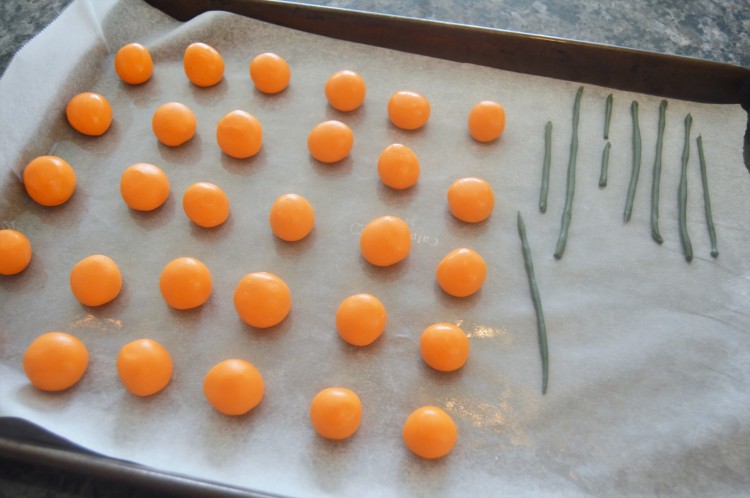 I let everything chill for about ten and then I cut my green ropes into stems for my pumpkins. I did this by eye and didn’t worry too much about getting them all the same. Next, I started to shape my pumpkins. I used a fondant knife to make the indents on the sides of my pumpkins, this had to be done quickly because the fondant begins to get soft and harder to work with. I found that pressing the knife into the fondant instead of cutting worked better for the shape I wanted.  Once I had the grooves done on the sides of my pumpkins I used my finger and gently pressed down on the top of each of them to give them that slightly indented look that pumpkins have.

Next up I used the remaining green fondant and broke off little pieces and rolled them into pea-sized balls, and then using a fondant tool I carefully added it to the indent on the top of each of my pumpkins to make it look like the stem was growing out of it.

Now for the stems!

I used a fondant the same tool I used in the last step to gently blend one end of the stem into the top of my little pumpkins, and then shaped the stem around the tool to give it a more realistic look.

Now that the pumpkins are assembled I used a clean eyeshadow brush( beauty blogging and baking intertwine) and lightly brushed on some cocoa powder. I started with the bottom and did a heavier coat and then lightly dusted the rest of the pumpkins. This step gave them a fresh picked look. 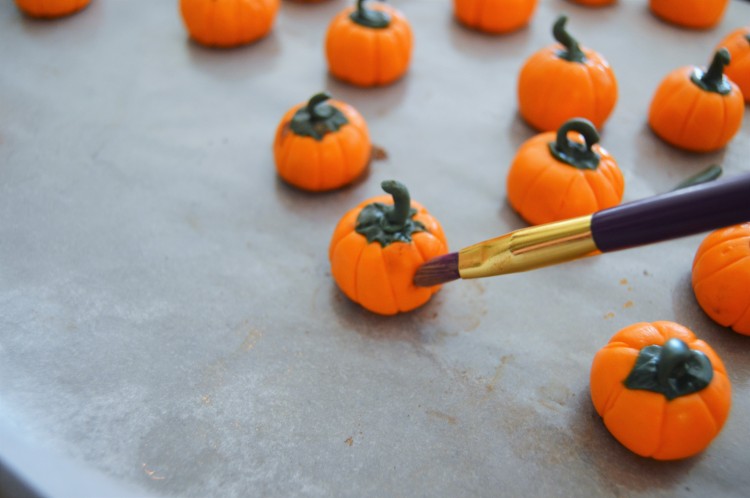 I put all of my pumpkins back in the fridge and let them sit overnight, to be added to cupcakes the next day.

These came out so well and were better than I could have hoped for them to be. While these were time-consuming and a little tricky, I would one hundred percent make them again.

If you want to see the cupcake recipe that I made these to go with it will be up tomorrow, and I will link it (here).